A large group of lesbian, gay, bisexual and transgender Ugandans descended on St Neots, Cambridgeshire on Saturday to protest against evangelical Paul Shinners for his failure to apologise for participating in an anti-gay rally in Uganda on 31st December 2012, where he spoke in favour of the DEATH PENALTY for LGBTs.

According to San Francisco-based human rights activist Melanie Nathan the protest was launched to confront Shinners and demand an apology, as he had traveled to Ugandan to preach at a rally where Christian leadership called for passage of the Anti-Homosexuality Act at a time when it was referred to as the "Kill the Gays" Bill.

Shinners was challenged by several human rights activists back in 2013 over what they termed as “his radical Christian extremist views” when he participated in The 7th National Day of Prayer in Uganda hosted by the aggressively homophobic David Kiganda.

Yesterday’s protest was organised by the Out and Proud Diamond Group (OPDG), consisting of Ugandan LGBTI exiles and their allies, human rights activists Melanie Nathan and myself.

The protestors surrounded the Cornerstone Café, A Christian coffee shop owned by a charity operated by Shinners. The large group of LGBTI exiles and their allies, carried banners, chanted and drummed, calling for an apology from Shinners. They chanted slogans that included:

• Paul Shinners, some Ugandans are gay get over it.
• Preach love not hatred.
• Shinners keep your hate out of Africa.

Shinners came out and engaged with some of the protestors, calling them “bigots” and threatening them with police action. The photo below shows a despondent Shinners complaining about the legal demonstration to a local policeman … and getting nowhere.

Shinners flatly denied saying ever saying that “Uganda would be blessed” for proposing the “Kill the Gays” Bill. He even threatened Nathan, Duke and myself with legal action for “defamation”.

But after a great deal of effort, I managed to obtain footage showing that Shinners had consistently lied about his hate-mongering in Uganda. The video shows Shinners preaching on a stage shared by several homophobic Ugandan religious leaders, where they praised Ugandans for their stance against homosexuality and called for passage of the Bill, which included the Death Penalty...

I subsequently launched a successful appeal to raise funds for a video to expose the activities of Western anti-gay pastors who travel to Africa and other foreign destinations to drum up hatred against LGBT communities. I have since launched a fresh appeal for additional funds and I would be grateful to anyone who would be able to support it.

According to Nathan, Shinners "has continued to refuse to take responsibility and apologize for his participation at that rally where, merely by virtue of his appearance, and regardless of his words, he supported the Bill that contained the death penalty for gays."

One of the protestors, Edrisa Kiyemba, of Out and Proud Diamond Group said "its unfortunate that Paul Shinners is a free man in the United Kingdom, yet I cannot be free in my home country – because of his homophobic preaching in Uganda."

At the time of Shinner’s appearance at the rally, the Ugandan Anti-Homosexuality Bill, which contained life in prison and the death penalty, had yet to pass. The Bill was passed a year later and soon overturned by the Ugandan courts because Parliament failed to pass it with the required quorum. Parliamentarians are seeking to re-table the Bill. Thought it was nullified as at the time of it's passing there were not enough MPs present, the passage has led to a 2000% increase in homophobic attacks and the situation for LGBTs in Uganda is going from bad to worse. 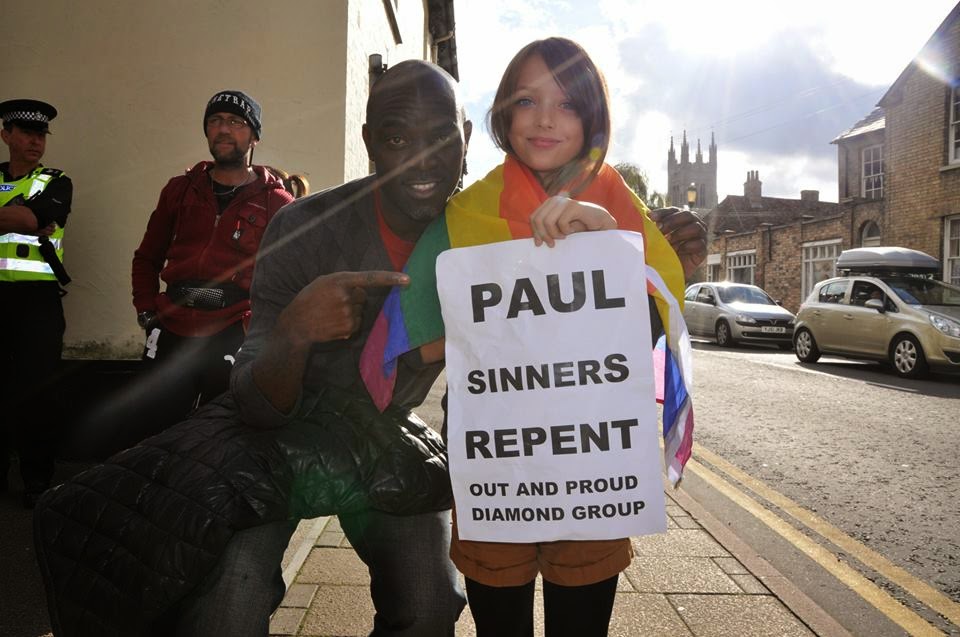